When it comes to exploring the scenic beauty of California, we can’t find places any better than the cities of Los Angeles. These are full of glamor and entertainment. Having said that, let’s peep to some of the awesome places to visit in California.

Los Angeles is the entertainment capital of the world. When you get a taste of the amazing beaches, perfect weather, and colorful culture, you’ll understand why this is the place where celebrities and movie stars make their homes.

Originally a remote Spanish outpost, Los Angeles is now the second largest city in the United States . It is the capital of the world’s entertainment industry and a major industrial, scientific, and cultural center.

Los Angeles has so many attractions to offer. Here you can visit the Hollywood Walk of Fame, go shopping on Rodeo Drive, enjoy the rides at Disneyland or Universal studios or just relax on one of the lively world-famous beaches of Santa Monica, Malibu, or Huntington.

The Hollywood Walk of Fame has the stars and handprints of all your favorite movie stars. As you stroll down the street you’ll see over 2500 stars and the world-famous Kodak Theater, where the Oscars are awarded every year.

The Rodeo Drive is the place where Hollywood celebrities go shopping. BCBG, Bulgari, Cartier are just a few of the many luxury stores located here. Just walking down this exclusive street you’ll feel like you’re in the movies as the surroundings remind you of the countless films recorded on this famous shopping strip.

Santa Monica is a truly unique place with its beach atmosphere and its Third Street Promenade shopping. Don’t miss the chance to walk out along the Santa Monica Pier and see its iconic Ferris wheel.

The Universal studios offers an unforgettable experience inside the movie industry. Its various attractions and rides will keep you entertained all day. You’ll see amazing stunt shows as well as old sets left from famous movies of the previous decades.

The Disneyland is the original Disney amusement park and the only park designed by Walt Disney himself. Known as the happiest place on earth, this park offers countless attractions, rides and shows. Disney’s California Adventures park is next door and offers thrill rides that will put you on the edge of your seat. It is also known as one of the most haunted places in Los Angeles due to the fright it produces.

It is located on the south-facing side of Mount Hollywood and offers breathtaking views of Los Angeles . From here you’ll see Hollywood , the skyscrapers of downtown, and the Pacific Ocean stretching out into the horizon.

This Theatre is located on Hollywood boulevard is a national icon as it has hosted countless movie premiers. The forecourt of the theater is famous for its concrete blocks with foot prints, hand prints, and signatures of the stars of the film and music industry, as well for the numerous street actors dressed up as celebrities. .

This concert hall in downtown Los Angeles, is the home of the Los Angeles Philharmonic orchestra. The hall is considered to be one of the most acoustically sophisticated concert halls in the world providing unparalleled musical experience. 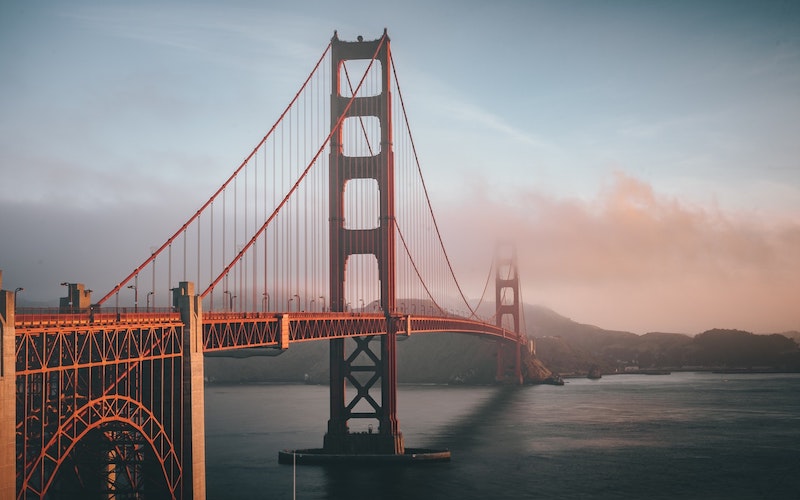 San Francisco is the place where sea, land and sky meet together with beautiful architecture and a vibrant and colorful culture. The city’s impressive buildings and diverse neighborhoods will impress you almost as much as the magical view of the Golden Gate Bridge as it stretches its way through the clouds.

San Francisco has the richest history of any city on the West Coast. The 1849 Gold Rush brought a flood of treasure seekers and San Francisco became a thriving city and a bustling port at a time when most western towns were only villages.

You’ll never run out of things to do in San Francisco. Don’t miss the chance to see the downtown’s famous skyscrapers including the Transamerica Pyramid or to relax and enjoy the view from the Golden Gate Park . You can also watch street entertainers at Fisherman’s Wharf or visit the city’s colorful Chinatown, one of the largest in North America .

Fisherman’s Wharf, once a bustling shipping area, is now a popular tourist attraction and hosts many city events such as Fourth of July fireworks and the Fleet Week air shows. While you’re here stop by the famous Pier 39 with its gift shops and its main charm – California Sea Lions.

Alcatraz Island visible from the pier, is the most famous prison in U.S. history and often referred to as The Rock. It has been shown in many films, TV programs and as a prison had many notable inmates such as Al Capone. This island had seen many gore and brutal deaths in the past and there is no wonder why it is in this list of most haunted places in San Francisco.

The Chinatown is one of the oldest and largest Chinese communities outside of Asia . Take a stroll through its colorful streets and step into a few of the gift shops, herbal stores, dragon shows, and restaurants that make this neighborhood truly amazing.

The Golden Gate Bridge is an engineering marvel and an architectural piece of art. After its completion in 1937 it held the title of the longest bridge in the world for 27 years. According to Kodak this bridge is the most photographed object in the world.

The Presidio of San Francisco

It is a national park in the northern part of the San Francisco Peninsula . During its history this fort was under the possession of Spain, Mexico, and finally the United States . It is now a recreational paradise with amazing views and beautiful trails.

Some other attractions in California

The San Francisco Financial District is the area of the city that serves as the main business district. The skyline is filled with countless sky-rises including the Trans-America Pyramid and the district is home to numerous foreign embassies and consulates.

The Cable Cars of San Francisco are an icon of the city. Don’t miss the chance to ride up and down the hilly streets of the city in one of these cars that have been around for almost half a century. The cable cars are used today mostly by tourists rather than by commuters.

The San Francisco Palace of Fine Arts offers a wide collection of European Art. Here you can view works of famous European artists such as Rodin, Picasso, Degas, Rembrandt, van Gogh, and Renoir. The palace is also a popular place for weddings in the San Francisco Bay Area.

San Francisco Bay Cruise No trip to the city is complete without a ride through the famous San Francisco Bay onboard a luxury cruise boat. You can enjoy cocktails on deck while you view the breathtaking city skyline in an atmosphere of ease and luxury.

Previous: Most Famous Beaches in South Goa
Next: 10 Most Stunning Beaches in Maldives for a Romantic Getway